The 2021/22 FIS Masters’ Cup (FMC) season was recently concluded in Abetone, Italy; in total there were 27 Canadians who participated in the series, including 8 who raced internationally.

The first season highlight was Stéphane Ricard’s performance, making history as the first Canadian to win the Crystal Pillar for overall, in the A category (men under 60), as well as a Crystal Globe for third in the men A6 55-59 category. Stéphane had a truly spectacular season, participating in 35 FMC races (29 international + 6 home), achieving 22 podium finishes. His race schedule took him to 8 different countries including Canada, United States, Italy, France, Switzerland, Austria, Slovakia and Slovenia.

Another highlight from the season included Mike Robbins’ performance. Mike competed in 19 FMC races (13 international + 6 home), achieving 15 podium finishes and coming very close to winning a Crystal Globe, in the men B8 65-69 category. 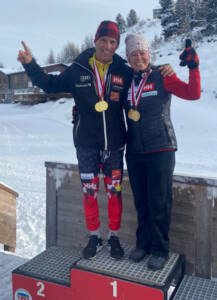 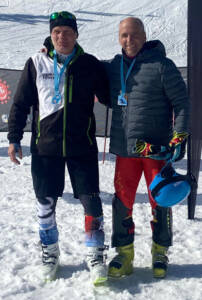 The popularity of FMC racing seems to be on the rise. Overcoming COVID related lockdowns, this year Canada was able to host six FMC races at Stoneham Quebec, attracting a total of 25 Canadians, and 11 international racers from Chile, France, Italy, Switzerland and USA.

Canada is scheduled to host a FMC out West next season, and hopefully followed by hosting the World Criterium event in the 2023/24 season. Stay tuned for further announcements . . .

Back to recent news