Canadians at US National Masters’ Championships, February 6-10, 2018 in Okemo, Vermont

HomeCanadians at US National Masters’...

Canadians at US National Masters’ Championships, February 6-10, 2018 in Okemo, Vermont

02/12/2018, Lloyd Sevack: The US National Masters’ Championships come to the east every 4 years, this year being one, held February 6-10, 2018 in Okemo, Vermont, where 11 Canadians participated and with many podium finishes. Over half the Canadian field raced in the two largest classes; 3 Canadians were amongst 28 racers registered in class M8 (men 60-64) and 4 Canadian were amongst 29 registered in class M7 (men 55-59)!

Just 2 days before the event, 30 cm of snow fell, making for massive race hill preparations that the amazing crew at Okemo readied for the SG training held on Tuesday. This was followed by the SG race on Wednesday that the Race Committee decided to attempt with an early morning start in order to be done before noon, when the next blizzard was forecast to hit. Snow stared falling midway through the B group (men ages 55-64), leaving half that field and all the A group (men under 55) having to do their runs as the snow began.  That afternoon and evening, another 35 cm of snow fell! Some racers chose to whoop it up in the fast accumulating pow that afternoon!

Hill and course preparation on Thursday morning was very challenging with so much new snow, but the race crew and racers managed to get the SL courses ready for the combined SG + SL. Needless to say, this was pulled off on a soft and increasingly rut-filled track. As it was impossible to pull off the SG that same day, the results from the SG the day before counted to culminate the combined.

On Friday, the A & B groups raced SL, the C (women) and D (men 65+) groups raced GS, with a reversal of race disciplines on Saturday, the final day, in plus temperatures and very soft snow.

Canadians succeeded with a number of podium finishes. Very special mention goes out to Jeff Sutherland capturing the silver for the overall in the men’s M7 (55-59) category, and to Cinthia Audet, achieving gold in the US National Championships in the women’s M6 (50-54) category!

Complete race results may be found at http://ussamasters.org/2018/nationals#results

7 members of the Canadian delegation ready to throw themselves downhill! 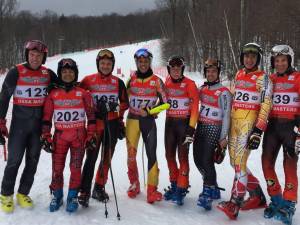 Back to recent news